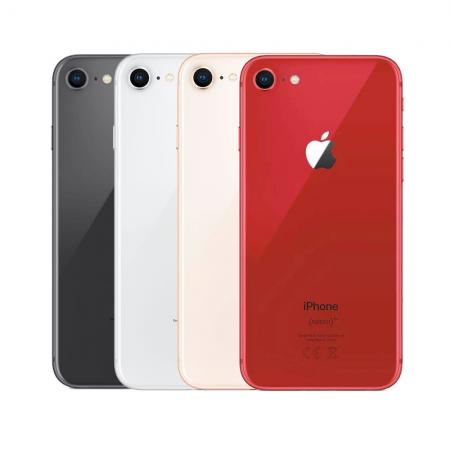 You are looking at a used iPhone 8 64GB which is one of Apple’s flagship smartphone models. We stock a range of pre-owned iPhone 8 colours and storage sizes – whatever you’re looking for, Gizmo2Go has what you need.

All our second-hand phones at Gizmo2Go are fully checked, cleaned and tested using state of the art software to ensure your new device is in full working order and come with a Gizmo2Go 12 month warranty for added peace of mind for your refurbished iPhone 8.

What’s in the box?

Introduced on September 12, 2017, the renewed iPhone 8 represented a “huge step forward for the iPhone,” according to Apple CEO Tim Cook. The device “improve on everything we love about iPhone” with overhauled internals and a tweaked design, but the changes introduced were not as dramatic as the changes brought to the iPhone X, launched alongside the iPhone 8 and iPhone 8 Plus.

The cheap iPhone 8 mix a little bit of the iPhone X with a little bit of the previous-generation iPhone 7 and iPhone 7 Plus. The overall design is the same as previous-generation devices, but the second hand iPhone 8 adopted glass bodies sandwiched in a a matching aluminum frame. Unlike the iPhone X, the preowned iPhone 8 continued to include Touch ID Home button and thick bezels at the top and bottom of the display.

Presently available in four colors, Silver, Space Gray, Gold and Red, the refurbished iPhone 8 featured the most durable glass ever in a smartphone in a reinforced steel and aluminum structure that is IP67 water and dust resistant. The stereo speaker setup in the device was updated to be 25 percent louder with deeper bass.

Apple chose glass for the body of the cheap iPhone 8 to enable a Qi-based inductive wireless charging feature, which allows the two devices to be charged when placed atop any Qi-certified inductive charger.

Inside the refurb iPhone 8, there’s a six-core A11 Bionic chip, which Apple at launch said was the smartest, most powerful chip ever introduced in a smartphone. There are two performance cores that are 25 percent faster than the A10 Fusion chip in the iPhone 7, and four efficiency cores that are 70 percent faster.

Visit our TrustPilot page to read our genuine customer reviews.

There are no reviews yet.

Be the first to review “Apple iPhone 8” Cancel reply